The casting of the Rugby World Cup France 2023 in Toulouse will be exceptional!
No less than New Zealand, Japan, Samoa, Georgia and Fiji will be playing at the Stadium de Toulouse during the pool stage of the competition. 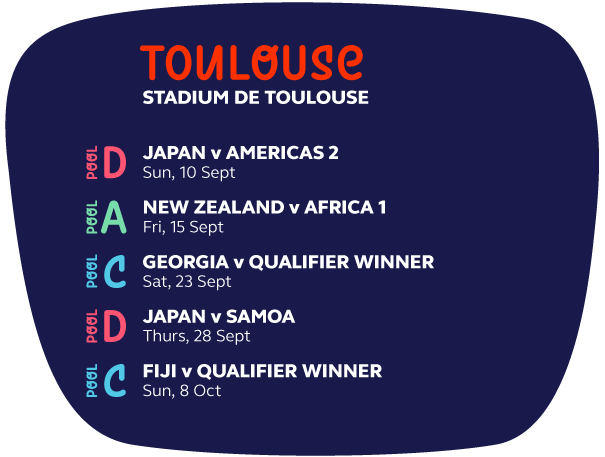 Toulouse is an unmissable stop in the south west of France and the embodiment of the region’s festive spirit and unique atmosphere. Located on the banks of the Garonne, Toulouse boasts a charming city centre that combines both deep heritage and art-de-vivre. And, with its huge Occitan cross in the heart of the city, the Place du Capitole ranks as one of the world’s most iconic rendez-vous locations.

The homeland of “good living” where the world-famous cassoulet and saucisse de Toulouse can be found, the city welcomes you with the friendliness you expect from a rugby-loving community. And you won’t have to go too far before noticing the feats of its local red and black team, multiple champions of France and Europe.

Toulouse, European capital of aeronautics and space industries, is nicknamed the “Pink City” because of the colour of its bricks, noticeable on all its famous buildings, such as the Musée des Augustins, the Basilique Saint-Sernin and the magnificent Jacobin convent, but will be looking to earn another name at Rugby World Cup 2023. Its passion for the oval ball will be celebrated throughout the city, and even more so in its Stadium, nicknamed “Little Wembley”, which never misses an opportunity to shine for sporting feats.