The casting of the Rugby World Cup France 2023 in Saint-Denis will be exceptional!
No less than France, Australia, New Zealand, Scotland, Ireland, Georgia and South Africa will be playing at the Stade de France during the pool stage of the competition.

The Stade de France will also host 2 Quarter-Finals opposing the 2 first teams of pool A and pool B, 2 semi-finals, the Bronze Final and the Final. 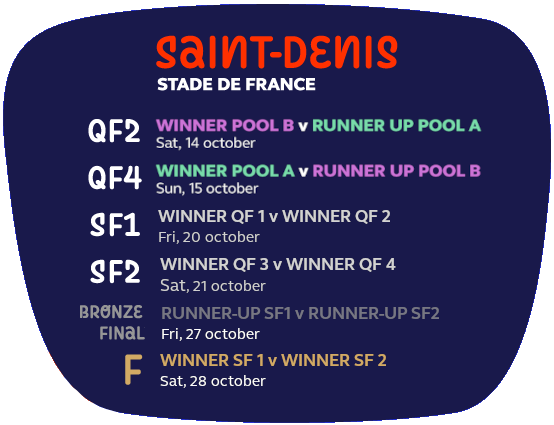 ” And the Saint-Denis movie continues to play out daily. A stone’s throw from the centre of Paris, this city which bursts with energy draws its strength from its dynamism and continues to reinvent itself.

Saint-Denis is also home to the temple of French sport, the Stade de France. It is the country’s largest venue, hosting legendary music concerts and being home to some of the most iconic sporting events in history; the 1998 FIFA World Cup, the 2003 IAAF World Championships, Rugby World Cup 2007 and UEFA Euro 2016, just to name a few.

The venue of the opening match and the final, the Stade de France will continue this glorious lineage with Rugby World Cup 2023.