The casting of the Rugby World Cup France 2023 in Nice will be exceptional!
No less than England, Italy, Scotland, Wales and Japan will be playing at the Stade de Nice during the pool stage of the competition. 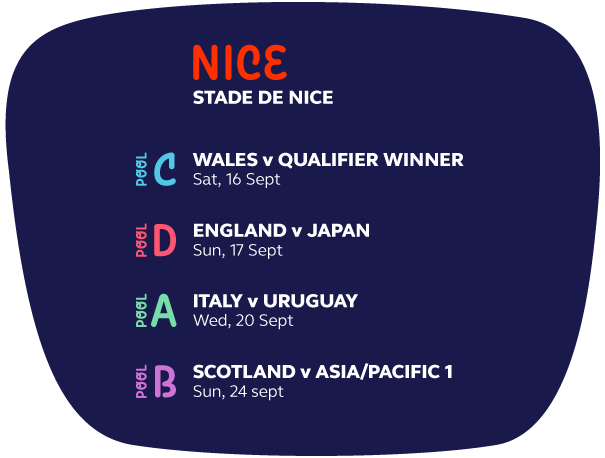 Built on the banks of a remarkable bay, the capital of the Côte d’Azur is a popular destination for visitors from all over the world. Nice is nestled between the Mediterranean Sea and the surrounding mountains and its natural landscape has inspired generations of great painters and artists. Henri Matisse, in particular, was captivated by his palm trees.

Traditional gastronomic specialities, such as pan bagnat, pissaladière or socca, can be found in the city’s authentic alleys and piazzettas. Alternatively, pack a picnic and head to the beaches, which are bathed in sun 300 days of the year, or take calm refuge in the shade of the wooded parks.

Close to Italy and famous for its Promenade des Anglais (“Walkway of the English”), the city is full of Mediterranean flavours. It also plays host to one of the world’s most famous festivals, the Nice carnival, epitomising its colourful character.

After the success of UEFA Euro 2016, Nissa la Bella is preparing for a new international celebration with Rugby World Cup France 2023, in one of the greenest stadiums in Europe.