The casting of the Rugby World Cup France 2023 in Lyon will be exceptional!
No less than France, Wales, Australia, Italy and New Zealand will be playing at the OL Stadium during the pool stage of the competition. 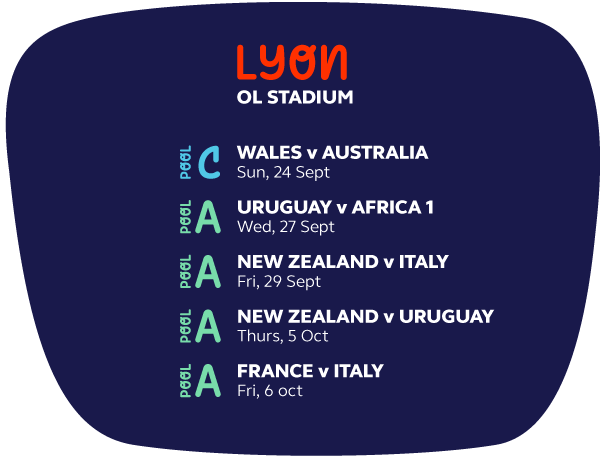 At the junction between two major rivers, the Rhône and the Saône, Lyon is a city where many trends converge, one whose heritage is marked by a litany of brilliant characters. From the Lumière brothers, the godfathers of cinema, to Paul Bocuse, three-star Michelin chef for 53 years, the history of the capital of Gaul reads like a Who’s Who of French cultural pioneers.

Located at the centre of the major wine regions of Beaujolais and Côtes-du-Rhône, Lyon is also rich in local food specialities which can be enjoyed in the traditional “Corks”, concentrated in the alleys of Old Lyon, the Terreaux district, Rue Mercière and Rue des Marronniers.

Lyon sparkles with a thousand lights, accentuated each year when the city hosts the Festival of Lights, a monumental, visual and interactive show that illuminates the masterpieces of the Basilique de Fourvière, the Place Bellecour, the Théâtre des Célestins and the Fresque des Lyonnais to name but a few.

It is in this vein that the OL Stadium, the third largest stadium in France, will host the stars of Rugby World Cup 2023. After Rugby World Cup 2007 and the European Challenge Cup final in 2016, Lyon is preparing to dazzle with yet another five-star event.